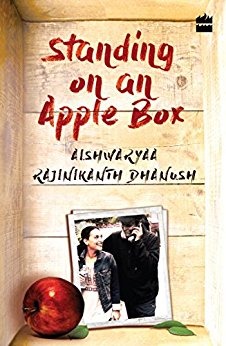 Standing on an Apple Box , the story of a girl among the stars is about a celebrity child who was grown up where movie sets have been a part of her life but brought up by parents like a normal child.

Wonderful foreword written  by Shweta Bachchan Nanda where she could relate herself to the growing life of Aishwaryaa Rajinikanth Dhanush as a celebrity kid. The Book has 35 chapters taking us to each stage of life which she has to go through and about the important people who influenced and motivated her in the path of success.

It is a simple book and good  flow in writing. I found it interesting and was glued to the book till the last page.

Director, dancer, goodwill advocate for the United Nations – Aishwaryaa Rajinikanth Dhanush is so much more than the daughter of a legendary actor, or the wife of southern cinema’s biggest reigning star. Growing up in Bangalore and then Madras, in a household that resolutely kept out any hint of her father’s super stardom, she was a quiet, introverted child whose greatest pleasure was a visit to Marina Beach and an occasional meal out. It was not cinema but law that became a preoccupation when she started thinking about college and career – but fate, and her mother, had other plans for her.

Aishwaryaa writes with disarming honesty about life as Rajinikanth’s daughter, of falling in love and raising two boys with Dhanush, of fighting her own demons and finding satisfaction in a career of her choice. She reflects on the many roles a woman has to juggle at home and outside – in her case, under the watchful gaze of cameras.

Intensely personal, but also inspirational, Aishwaryaa’s memoir is an unusually frank insight into growing up in cinema-land. A playful meditation on the joys and difficulties of being a woman in this age, Standing on an Apple Box is as much a celebration of individual fulfillment as it is of family.

Aishwaryaa had a pretty normal childhood. Her father never ever behaves like a superstar at home. Her life is as same as 24 hours of a normal person except that when she does it, people notice. Nothing is easy for  Celebrity children. Unless you have talent, you cannot succeed, no matter who your family is. The Way to any achievement rests solely on one’s shoulders. Most of the credit goes to Aishwaryaa’s mother for having brought us up without any visible signs of her father’s stardom. And to her father, for being the humble person he is, never hinting at his stardom.

Celebrity Kids are kids too. Too much attention, too much exposure and too much magnifying of their actions can spell disaster. Society could leave these kids alone and not stunt their childhood.

In the Chapter “Meditation”, Mr, Rajinikanth’s view of how he finds the strength to always remain true to oneself  has been depicted beautifully. If there is good in the world, there has to be bad for balance to be maintained. Think dark thoughts and fear will surround you. Think Good thoughts and good will come to you.

Her father had to straddle two worlds, the traditional one he was brought up in and the modern one his daughters were growing up in.

Her Mother understood the significance of vacations for the importance of happy childhood memories and involve the entire family. Both Sisters believe in Family comes first. If parents are a sustaining meal, grandparents are the much looked forward to dessert.  Aishwaryaa was brought up by her grandparents in Bangalore. Grandmother was a bold woman who could strike up a conversation with anybody. Grandfather was a fountain of Information.  He  starts reading the newspaper with sports section and head towards the main news so that he can start with something positive and light, first thing in the morning. They were health conscious, had a disciplined lifestyle, happy with their simple life and enjoyed what they had to the fullest.

Her Mother started a school called Ashram as she was interested in teaching.  The school started off small, with the intention of evolving a different way of learning. Ashram had a policy of teaching through application. Education is the greatest gift one can give to one’s own self-worth.

It’s never too late and when every door slams in your face, a window opens somewhere. She had to face lot of hurdles to achieve her passion of studying law.

She celebrated all festivals with her family and grow up understanding the beauty of different religions and communities. The sacrifice that is celebrated at the end of Ramzan, the message of love at Christmas and the triumph of good that is enacted at most Hindu festivals. She appreciate and make her children understand the soul of food, rather than its fleeting pleasures.

She had trusted friends and chose friends wisely so that nobody could take advantage. She recommend  a close friend of the opposite gender for everyone as it makes relationships so much easier to understand. She categorize her friends as below:

Water on a lotus leaf – Touch and go without leaving any memories.

Cats and dogs  – Always fighting but connected by a strange bond and get along irrespective of traditional enmity.

Flower and butterfly – The flower gives, the butterfly takes and flies away.

The project friendships – Last as long as the project, the employment together,the holiday together,etc.

The social friendship – Friends who meet only at social gatherings.

There were times when she blamed her mother for her reserved nature. Then she understood it was nature, not nurture.

Dogs as pets became part of her life and gave it a new meaning. Dogs according to her are like saints in a way teaching us life lessons while asking only for affection in return. Love them and they love you back tenfold.

She describes about a Fan whose name was Karthik who was a part of a Rajinikanth fan club in the chapter which has a  tragic ending.

The Making of a Marriage Chapter tells about her simple marriage and how she met her soulmate Dhanush. She says Marriage is like between two independent individuals who love each other for what they are, not for who they want them to be. After marriage, she understood the effort her parents had put into making their lives normal. Her husband’s companionship has made her more confident and given her the greatest gift of all – a family of her own.

Biography of a Mother Chapter tells about the struggles which her mother-in-law had to face in bringing up her children. She has opposing traits in her, of strength and sensitivity. As all her four children are well settled and living their lives with their own families, it makes her lonely, since her entire life revolved around them till recently, yet she accepts it with a smile.

Aishwaryaa’s maternal grandparents insisted on certain things, One was learning the English language the correct way.The Emotional support of her family was tremendous during difficult times when her father was sick.

She beautifully describes about the sacred thread as a testament of love.

In the Chapter Kiddy Lessons, she tells about the lessons she learned from her kids, about their upbringing and also makes us know about the inner child in her.

Tough Love brings about the relationship between her and her brother in law. Being a reserved person,  he was protective, caring and was also strict to bring her passion of direction alive. Showing no partiality towards her as a family member to pursue her dreams and making her understand Movie Industry isn’t an easy place to work in. He was more dedicated to his work and strictly follows work ethics. He prepared her for the hard realities of life in the movie industry.

Her parents and grandparents never let her feel inferior because she was a girl child. Her father’s numerous acts of charity that he never spoke about and her mother’s work with underprivileged children taught her that it was our responsibility to contribute to society. She was appointed as UN Women’s Advocate for Gender Equality and Women’s Empowerment in India.

In her acceptance speech, she says Small victories and quiet celebrations are very important in a long journey. They teach us not to lose heart, they help us to believe that preseverance and hard work can and do take us far. While we focus on the task ahead,it is also important to cherish what we have achieved until now.Nothing noteworthy , can be achieved without a plan, focus and an indomitable spirit. Every action we take has to be measurable and result-oriented. And capable of being achieved within a set timeline.Let us not forget that many sacrifices were made so we can be here and that freedom does not come easy. This recognition is a way of saying thank you to everyone who believed in us.

Never think there is anything impossible for the soul. It is the greatest heresy to think so. If there is sin, this is the only sin: to say that you are weak, or others are weak.

She also started her journey to learn the art of Bharatanatyam which she left almost seven and half years.

She is  an all-rounder. God gives challenges only to those who can handle them. She is currently working on a three-part series on the unsung heroes of the industry. The first part deals with stunt men and women.The project started with a documentary, and went on with a petition to add stunt choreography as a category for the National awards. It is a surprising omission that must change. The second part of the series deals with junior artistes. They enter the field with stars in their eyes, but are soon struggling for survival and it is only their passion for cinema that keeps them going. The third and last part will delve into the lives of background dancers who are often the most underpaid in the industry. This trilogy is a tribute to these people who are not acknowledged, but are such an integral part of movie-making.

The Book was a complete delight and narration is just beautiful.