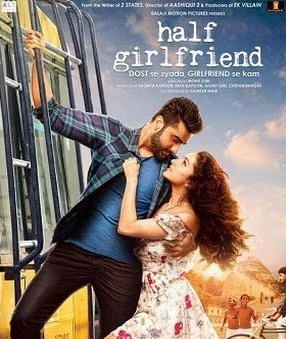 I have read this book in 2014. As I wanted to see the movie,  I thought of reading the book again as I couldn’t recollect anything from the book. When I started to read, the story was dragging and each chapter is exaggerated. This story  takes place in 3 locations: Delhi- Bihar- USA.

Movie has turned out well capturing only the important elements from the book.

A perfect romantic story ( although Chetan’s book itself was no less than a movie) and a good effort by Mohit Suri to make it live on the big screen. I was little worried if the Arjun Kapoor and Shraddha would be able to do the justice to Madhav and Ria, but after watching the movie I felt, they were close to it. But at the end, it’s a truly enjoyable movie.

Half Girlfriend, a film by Mohit Suri, is based on the novel of the same name written by Chetan Bhagat.  Certainly, some minor changes have been done in the screenplay but overall it remains the same. The concept of half girlfriend was to focus on non-committal relationships, where the boy and the girl have the chemistry of being in a relationship but not clear about the same. They might love to hang-out even during odd hours, they need one another in their lives, but not ready to accept that they have a boyfriend-girlfriend relationship. They are not ready to take their relationship to the next level. This film also showcases the story of a boy who is in love with a girl and wants to move ahead with her in life, but the girl feels that she could be more than a friend to him, but less than a girlfriend. So, the terminology used by her to define such a relationship is that of Half Girlfriend. They are not clear about their relationship status with each other. The film also deals with the linguistic challenges faced by Bhojpuri-laced Hindi speaking boy from Bihar who finds himself misfit amongst people speaking fluent English.  Here is a film, where the lead protagonist is from Bihar, gets into one of the most prestigious college of Delhi University, still unable to get over his challenges of speaking English even after spending three years in the campus is beyond comprehension. He does not find it difficult to adjust to the cosmopolitan culture of the campus, but finds it difficult to pick up English. It is also not understandable that why the names of the place Dumrao and the college St. Stephen’s college were changed to Simrao and St. Steven’s College respectively. The very plot has loopholes, and so is the film.

Balaji Motion Pictures Ltd., Mohit Suri and Chetan Bhagat Entertainment Pvt. Ltd.’s Half Girlfriend (UA) is the love story of a young boy and a young girl, who belong to different strata of society.

The film begins with Madhav Jha (Arjun Kapoor) rushing to a house to find that Riya Somani (Shraddha Kapoor) has left the house writing a letter to him. He travels to Delhi to hand over the letter to her mom and the story unveils as flashback during this train journey of Madhav. He is the prince of Simrao, whose mother Seema Biswas runs a school there for the underprivileged boys. He comes to Delhi to take admission in St. Steven’s College in Delhi University under sports quota (a basketball player) for BA Sociology. Riya also gets admission in sports quota. It is love at first sight for Madhav. He starts becoming friendly with Riya. Riya does take tips from Madhav in regard to the game, and also practices with him. They started hanging out together apart from game too. Madhav’s bunch of friends, especially Shailesh (Vikrant Massey) warns Madhav that he may not be a proper match to Riya who is from an affluent business family. Madhav does try to know Riya’s mind, for which her response was that she is his half girlfriend, more than a friend but less than a girlfriend. Madhav gets confused with her response. On his friends’ insisting, he does try to test her love which results in the fall out. Later the situations happen so that she chooses a different path in her life and moves away geographically. Madhav, unable to get over Riya, comes back to village after completing graduation. As it is quite predictable, Madhav and Riya’s paths cross once again. What happens to their relationship? How the story moves further? Does she become more than a half girlfriend to him ? Does their relationship status evolve? If yes, how?

In Chetan Bhagat’s book, Riya Somani is shown to be a victim of sexual abuse, but the film eschews this plot element to depict her father being violent towards her mother. Riya, meanwhile, seeks escape by strumming her guitar. Her dream is to be a jazz singer at a club in New York City.

Madhav, meanwhile, is shaping up to be a far more relate-able character than in the books. He’s shown struggling with the sense of inferiority the English-speaking elites impose on him because of his origins and accent.

If the first half of the film plays out like the regular love story, then the focus shifts to the language problem in the second half.

Half Girlfriend does try to deal with feminist themes: like Riya walking out of an abusive relationship, Madhav ensuring that girl child in his village receives an education.

The story is interesting and engaging. It may not be novel because there have been innumerable love stories about mismatched persons but there are novel turns and twists in this story, and they keep the audience hooked. Screenplay is engrossing  The first half is entertaining and quite light-hearted.  The second half has a lot of drama and melodrama, almost equally engaging and engrossing . Dialogues are appreciable.

Arjun Kapoor plays Madhav Jha with a lot of feeling and makes the audience fall in love with his simplicity and straightforwardness.Shraddha Kapoor acts with a lot of feeling and gives her cent per cent to Riya’s character. Vikrant Massey is lovely as Madhav’s best friend, Sailesh. His Hindi diction is commendable. His expressions are also very good. Seema Biswas puts in a dignified performance as Madhav’s no-nonsense mother. Rhea Chakraborty makes her presence amply felt in the small role of Anshika.

Mohit Suri’s direction is very good. He adopts an easy style of narration but shows his sensitivity in several scenes. To his credit, it must be said that he has extracted very good work from out of his key actors and has not let the drama lose its grip on the viewers. His song picturisations are exemplary; the songs almost always further the drama. Music is very good. Background music is in synch with the drama.

On the whole, Half Girlfriend is an entertaining commercial fare which will keep its audience happy.

Quotes from the Movie:

Never run away from situations, face it. If you play, may be you’ll lose … but if you run away, then you’ll definitely lose.

Some things break in such a way that, you can’t reconnect them … only rifts are left behind.

Don’t lose … instead defeat the loss. Never give up.

You don’t just find a reason, you have to search for it … ask your heart and not your mind for it … and once your heart finds that reason then the entire world will get together behind uniting you with your goal.

HALF GIRLFRIEND strikes the heart and soul, a FANTASTIC story of timeless love.