City of Joy welcomes us to Kolkata. ‘City of Palaces’.

Stepped into our Hotel located at Riitchie Road. As the day we arrived was Diwali, there was Kali maa pandals in streets and diyas lit in houses.  Walked to Kalighat Metro station and boarded metro to Esplanade. Kolkata metro was crowded, by Bangalore standards, though I am sure on weekdays it would be even more crowded.

At Esplanade, saw the pre-historic trams on the roads, and out of the smoggy night we saw a brightly lit Shaheed Minar:

Shaheed Minar, whose meaning in English stands for, ‘tower for the martyrs’  towers above the Maidan area. The Monument was erected to commemorate Major-general David Ochterlony, commander of the British East India Company’s main force in the Gurkha War of 1816.Rallies.

We walked in the park near Shaheed Minar- Beautifully lit park with fountains. Next destination was Esplanade Market near New Market – All sorts of knick knacks and clothes are available at reasonable/ Cheap rates. Above the Market place is famous Oberoi Hotel Balcony. We had sweet yummy lassi with nuts and almonds from the street vendor.
My stomach was full after having the lassi. Saw the Paradise which is an Old theatre. The weather was humid in Kolkata, even though it was late October. Also sawTongas – Horse Cart and wonderful chalk / rangoli drawings of Kali ma drawn on a pavement in Esplanade.

In Kolkata, it gets dark by 5 pm., so if one is planning to see places, my advise is to start early. We saw CESC (Calcutta Electric Supply Corporation) building. 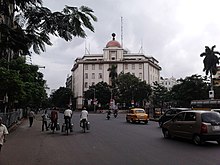 Bengali food is good and yummy even kids do enjoy eating as it’s not spicy. Park Circus Maidan becomes a focal point during the winter—especially in December and January—as it becomes home to circus companies and kids all over the city flock to the maidan to watch circus.  Don Bosco School, one of the schools in the city, is a major landmark of Park Circus.

On the way to Alipore zoo, we saw Hooghly Bridge & National Library of India.

We reached Alipore Zoo at 12 pm. We had a fantastic time. Enjoyed seeing animals of all kinds. Lion,tigers,beers,deers,crocodiles,reptiles,snakes,birds,peafowls,elephant,zebra, Giraffe,hippopotamus,etc. We returned back to Hotel at 3 p.m.

At night, the street lights at all places in the city are illuminated colorfully.

I was surprised to see good and pleasant roads for vehicles rather than the traffic jams and roadblocks in Bangalore. The Howrah Bridge is a bridge which links the city of Kolkata to its twin city, Howrah.
The bridge is  on the Hooghly River.

The way towards Howrah Bridge was very crowded. We had a walk on the Bridge with vehicles running on the road and the people returning from Kolkata to Howrah. On the Bridge, we could see the view of the second bridge – Hooghly Bridge. On the Banks of Hooghly River, there were ferries which are used by people to travel to and fro from work.

From Howrah Bridge, we took a taxi (an old ambassador car) to our next destination Dalhousie.

The Writers’ Building is the secretariat building of the State Government of West Bengal Writers’ Building originally served as the office for writers of the British East India Company. There is a statue of Britannia atop the main entrance. 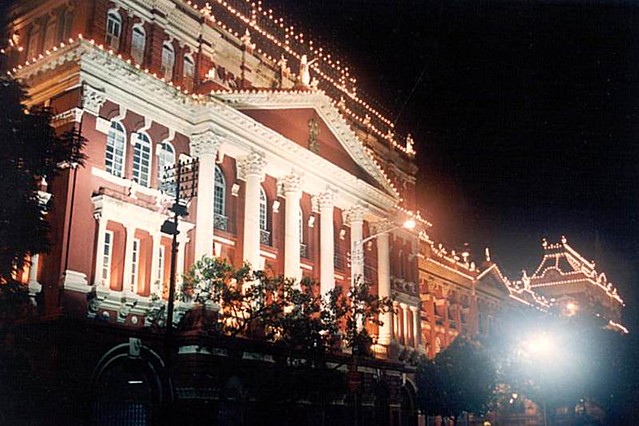 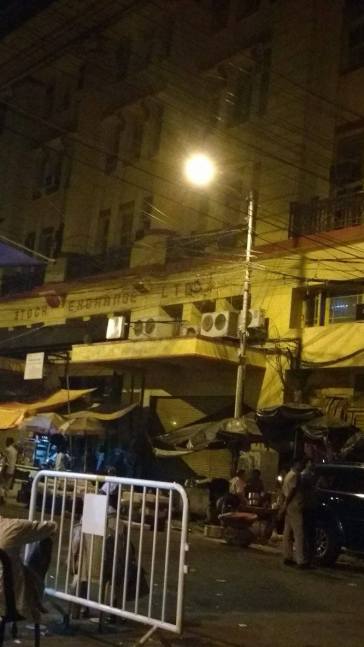 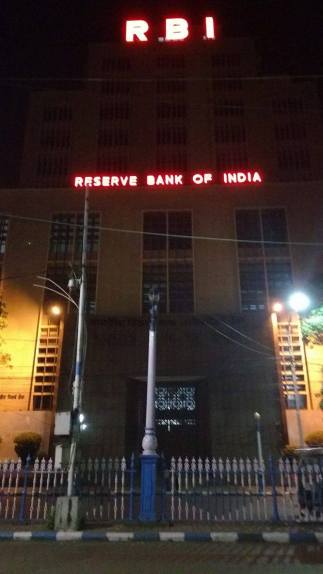 The fabulous collections of Nehru Children museum of Kolkata, includes puppets depicting the great Indian epics and gorgeous dolls dressed up in national costumes of different countries of the world. The dolls are being donated and they have  a name placard of the persons who donated them.
I noticed that some of the shop vendors do not give money change and we have to give the exact amount and in some places. The type of super markets which we see in Bangalore or Mumbai is not much prevalent in Kolkata. They mostly are kirana type shops with not much variety of stuffs.

Birla Industrial and Technological Museum (BITM)  provides an opportunity for the younger minds to experiment and understand the basic concepts of science. The Birla Industrial and Technological Museum,  boasts of a wide spectrum of gallery and design work ranging from basic to advance science such as electronics, Children’s corner, Transportation, Physics, Electricity, Numbers Fun, Nuclear, Communication as well as Mining, Iron etc.

The museum pro actively organizes film shows, games, sky watch sessions, fun filled learning sessions and a lot more. Various attractions as rabbit house, aquarium, aviary, bonsai, snake pits and an underground coal mine setup provide a deep insight into the field. The purpose of scientific awareness is innovatively achieved through generation of interest. It is a very good concept but it looked in need of urgent repairs and maintenance. Such institutions are very necessary for young minds even in this age of smart devices.

Just when were about to leave, it started to rain very heavily and the roads were flooded in no time. Took a long time to get a cab. It took 2.5 hrs to reach Dakshineswar Temple. During the Cab ride, we saw beautiful view of City – the lanes painted and decorated with vases and flowers and strangely quaint Hand Pumps in lanes. 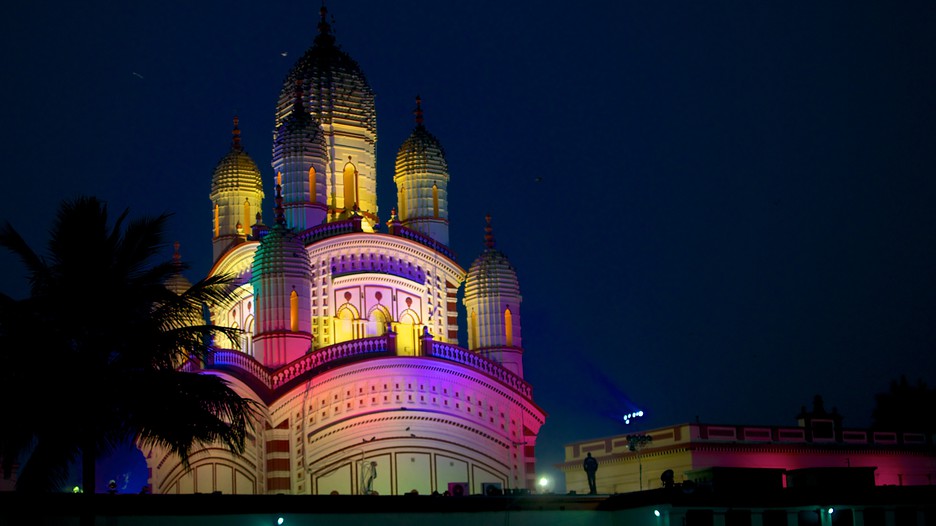 We went to Temple by Toto (Electric Rickshaw).

This temple is beside the Bally Bridge.

Bally Bridge
Dakshineswar Kali Temple situated on the eastern bank of the Hooghly River, the presiding deity of the temple is Bhavatarini, an aspect of Kali.
The temple compound, apart from the nine-spired main temple, contains a large courtyard surrounding the temple, with rooms along the boundary walls. There are twelve shrines dedicated to Shiva-Kali’s companion along the riverfront, a temple to Radha-Krishna, a bathing ghat on the river, a shrine dedicated to Rani Rashmoni.
Bally Bridge links the city of Howrah, at Bally, to its twin city of Kolkata, at Dakshineswar.
Gunday  Movie song ” Tune Maari Entryiaan ” was shot in this temple. 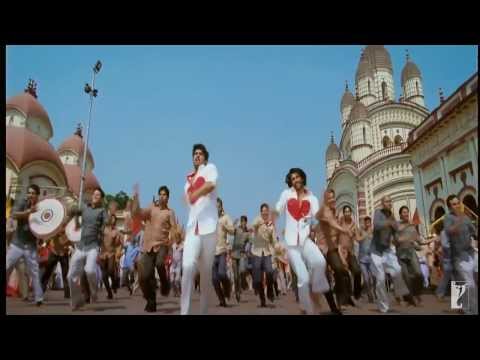 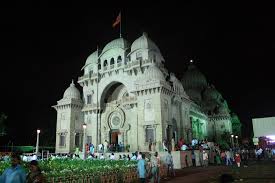 Belur Math is the headquarters of the Ramakrishna Math and Mission, founded by Swami Vivekananda. It is located on the west bank of Hooghly. The temple is notable for its architecture that fuses Hindu, Christian and Islamic motifs as a symbol of unity of all religions. The 40-acre  campus of the Belur Math on the banks of Ganga includes temples dedicated to Ramakrishna, Sarada Devi and Swami Vivekananda, in which their relics are enshrined, and the main monastery of the Ramakrishna Order. The campus also houses a Museum containing articles connected with the history of Ramakrishna Math and Mission. Divine and Peaceful place to be.
Strangely we saw a big Inox Mall which was not located in the city but on a small lane which was on the way from Belur Math.
Nandan:

Nandan is a government sponsored centre  for facilitating film awareness and includes a few comparatively large screens housed in an impressively architectured building. It shares its site with the Rabindra Sadan cultural centre.The complex, besides being a modern cinema and cultural complex, is a popular hang-out for the young and the aged. Nandan was inaugurated by Satyajit Ray in 1985. He designed the logo for the complex as well. Nandan is the symbol of art and culture in the city which is termed as the Cultural Capital of India.
Day 5:
Kalighat Kali Temple

The thousands of pilgrims who flock daily to the Kalighat temple treat Kali very much like a human mother, bringing her their domestic problems and prayers for prosperity, and returning when their prayers are fulfilled to express their gratitude. The temple has Natmondir, Jor-bangla, Sosthi Tala, Harkath Tala, Radha-Krishna Temple, Kalika Temple, Kundupukur, Nakhuleshwar Mahadev Temple etc inside its premises.
It’s very crowded and not maintained properly. The pandas / pujaris of the temple/trust are very rude and heckle the people on the road going to the temple, and inside the temple too. They will promise you to get a special darshan and charge money unnecessarily.
Birla Planetarium:

Birla Planetarium was closed due to renovation.
Victoria Memorial:

The  building is dedicated to Victoria, Queen of the United Kingdom and Empress of India. White Makrana marbles were used in the construction of Victoria Memorial Hall.
The Victoria Memorial is massive in its size and stands enclosed within blooming gardens. It has a Museum , Royal Gallery housing a number of portraits of Queen Victoria and Prince Albert and paintings illustrating their life, National Leader’s Gallery, containing the portraits and relics relating to Indian independence. Spectacular Creation.
We could see the view of Hooghly Bridge from the gardens of Victoria Memorial Hall.
Foods are available. The work of the palace is eye catching.
Peace Park, in front of Victoria Memorial, is a  nice, green and quiet spot.
———————————————————————–
Day 6:
We saw glimpses of Salt Lake City on the way to  Netaji Subhas Chandra Bose International Airport. 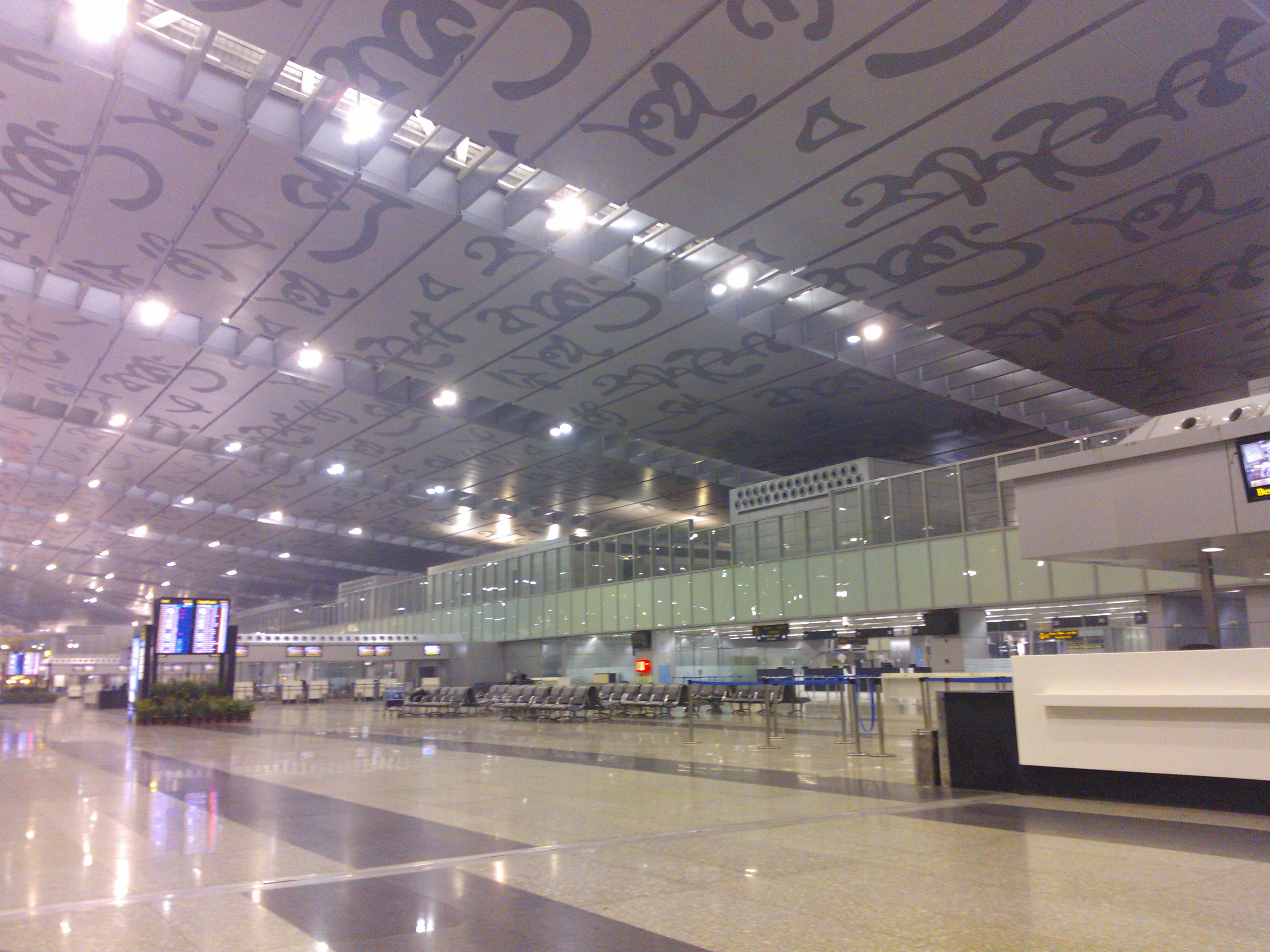 Off to Bangalore.
Still more places to see in City of Joy, I am so happy that i could cover the above  places within a short span. Looking forward to visit the rest of the places of attraction in the Future…….